Watch Out Tiger... Carrie's On Your Tail! 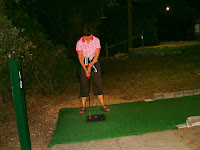 Nags Head, NC. The golfing world was stunned this evening as word reverberated that Carrie Apruzzi had just set a world 9 hole blistering record 18 on the first nine holes of the world renowned Blackbeard's Mini Golf here in Nags Head. She accomplished the feat by shooting a record nine straight two's! She parlayed that start with her 2nd 9 holes leading to her first "major" victory on tour. "Incredible" said her husband Phil as he could only watch in awe as he crippled along to last place. BA and Mike could only shake their heads.
Earlier today the fearsome foursome had spent a leisurely afternoon anchored on Kitty Hawk Bay munching on a combination of snacks.